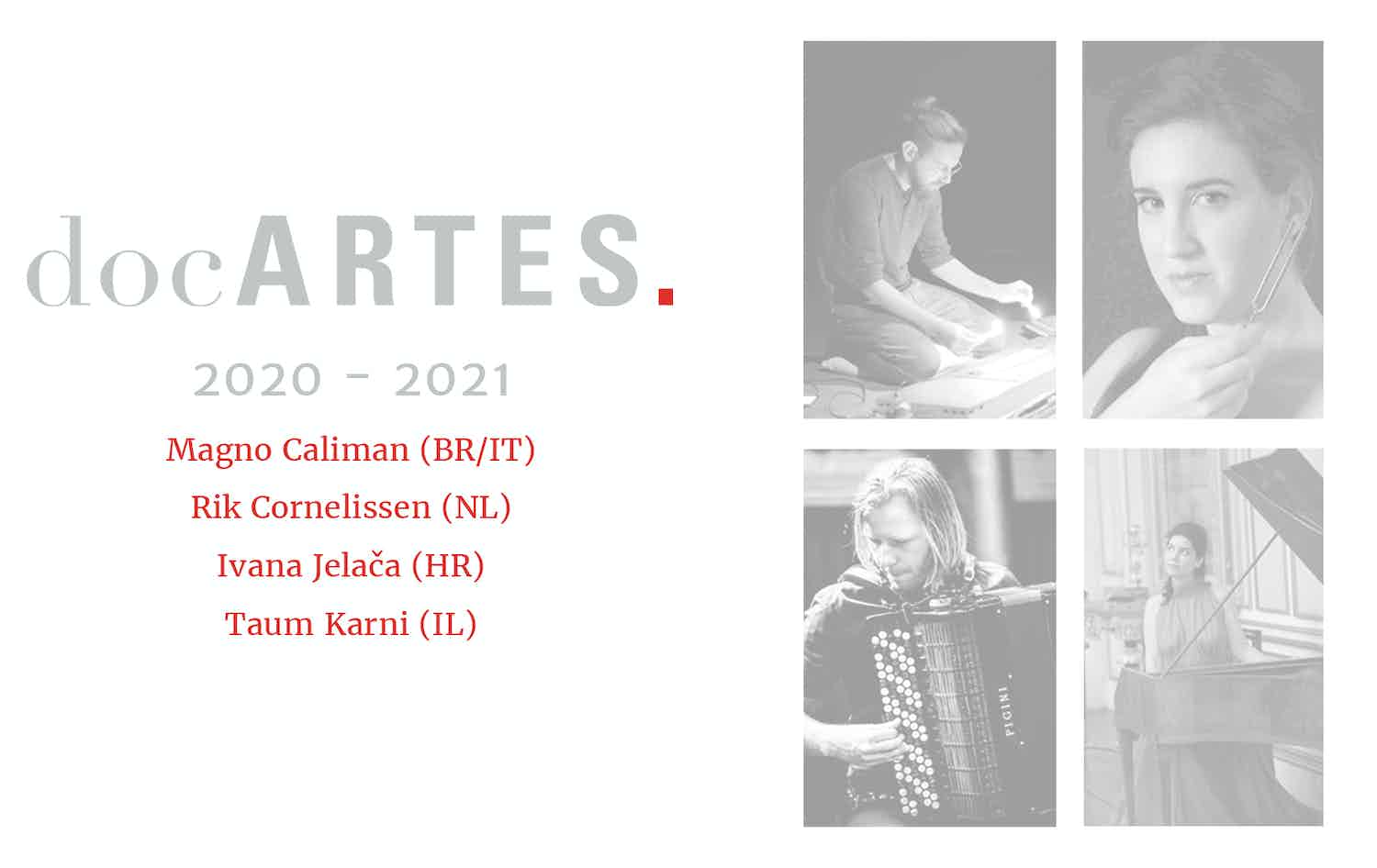 Sound artist, educator and creative coder, both his artistic and academic research activities are heavily rooted in the embracing of programming languages as places for poetical speculation, as well as the construction, modification and manipulation of electronic circuits. Magno has a degree in Music Composition and a master’s diploma in Education, where he developed and researched learning and teaching methodologies for programming languages in the context of the arts. He currently teaches Multimedia Art at Maia University Institute in Porto, and is part of the team running, managing and curating SOMAR, a venue in Lisbon dedicated to sound, art and technology.

Rik Cornelissen (The Netherlands, 1984) is an innovative and versatile accordionist, composer, arranger, bandleader, teacher, festival organizer, curator and much more. With a broad education and knowledge of jazz, latin, tango and classical music Rik is always searching for new possibilities, new sounds and new material.

Rik studied Bachelor Classical Music and Argentian Tango (Codarts, Rotterdam 2006) and Master Jazz & Pop (ArtEZ University of Arts, Arnhem 2009) and continued his education in Italy with one of the leading classical accordionist Claudio Jacomucci. Since 2013 Rik is appointed as an accordion and ensemble teacher at Jazz & Pop department at ArtEZ University of Arts. One of the rare places in the world to study Jazz accordion.

Rik’s debut album Traveller (2014) was a search for new possibilities and sounds on accordion within the jazz and Latin-jazz; focusing on and comparing with the richness of the piano tradition he managed to cross musical boundaries and combine classical techniques with improvisation and groove. This is characteristic for Rik’s playing; introvert, thoughtful and cogitating and then exploding, powerful, virtuosic and groovy.

As a bandleader, he works with, composes for and recorded with Tocar (album Birds of Paradise, 2016) and Trifid (album Dreamscape, 2018 and Sounds of Interstellar Space, 2020). As a sideman, he works with The New World Quartet (album Dances, 2019) and Jeen Rabs Quartet (album Catch my Kitsch, 2017).

As a composer and arranger his main goal is to create new music for accordion, either solo as for different groups and ensembles he is working with. His compositions are often inspired by Rik’s travels and fascination for nature and universe, levitating between styles varying from jazz and classical to Brazilian, Argentinian and other South-American music.

She graduated from Music Academy, University of Zagreb (Croatia) in 2008, where she furthered her education at the Postgraduate specialization studies- piano, with written work entitled The Art of Playing Piano Sonata in the Context of Cultural Change (under the supervision of Ljubomir Gašparović, prof. art. - Department of keyboard instruments and Dalibor Davidović, PhD, associate prof. - Department of Musicology. With this work she has started her research on aspects of musical performance in context of cultural changes and committed herself to performance on both historical and modern instruments.

During her education, she participated in numerous international Master courses in Croatia and abroad; led by Rudolph Kehrer, Jean François Antonioli, Dag Achatz, Vladimir Krpan, Eugen Indjic, Maria Jõao Pires, Malcolm Bilson etc. Since 2006, after she had attended the International Summer Akademie Prag-Wien-Budapest, she has taken additional studies, in both Zagreb and Vienna, with prof. Noel Flores.

At the age of 12, she performed for the first time with the Dubrovnik Symphony Orchestra, with which she has performed regularly as a soloist since then. She collaborated with Dubrovnik chamber orchestra, Croatian chamber orchestra, under prominent Croatian and international conductors, performing both in Dubrovnik and Zagreb. She performed numerous solo and chamber recitals in Croatia and abroad. As artistic assistant, she has attended postgraduate Specialization studies at Music Academy in Zagreb,  performing complete opus of Mozart and Beethoven violin sonatas.

Ivana Jelača works as a freelance artist and creative leader of The Rest is Music NGO. As its founder and artistic leader, she is developing and implementing projects that promote universal values of music (ARDEA project, co-funded by the European Union Programme Creative Europe), interpret cultural heritage (Renaissance Garden project, The other side of History- multimedia presentation of the Dubrovnik Walter‘s fortepiano, CD edition Croatian composers and their contemporaries on Walter's fortepiano from the Rector's Palace in Dubrovnik), and stress the important role of music in both upbringing and education as well as in social changes (Educational Cycle Gioachino's Cuisine and Slušaonica M.U.Z.A., Women in Music), conducted in partnership with the Caboga Stiftung, City of Dubrovnik, Dubrovnik Museums, Dubrovnik Summer Festival,  Dubrovnik Symphony Orchestra, Croatian History Museum.

Israeli conductor Taum Karni is active in the fields of opera and contemporary music, with an emphasis on a cappella contemporary choral repertoire, performance and improvisation. Taum is artistic director of Carmina: Israeli Singers Ensemble, which she founded in 2012 with the aim of creating artistic, thought-provoking, humorous and multidisciplinary performances of choral music in Israel. Taum is also the founder and co-conductor of REVOICE! International Vocal Ensemble, and was the conductor of Tel Aviv University's Student Chamber Orchestra in 2012-2017, as well as resident conductor of the Israel Women Composers Forum and artistic director of Vox Feminae Festival 2019.

Taum has studied conducting and musicology in Tel Aviv University, the Conservatorium van Amsterdam and the Royal College of Music, as well as opera conducting studies with Aharon Harlap. In the past year, she has been furthering her orchestral conducting specialization according to the school of Kenneth Kiesler.  As a musicologist, she has researched extended vocal techniques in 20th-century choral music.  She has worked with dozens of professional and amateur choirs and orchestras in Europe, Israel and Japan, as conductor, jurist and workshop leader over the past 15 years. In addition, Taum is trained in mediation and circle processes and is active in educational, social justice and conflict transformation projects such as Palestinian-Israeli choral project Common Ground Voices.

Taum has conducted the Latvian Radio Choir, the Danish Radio Vokalensemble, KMH Vokalensemble - made up of members of the Swedish Radio Choir, Stuttgart Kammerchor, Gaechinger Kantorei, Voces Nordicae, Manado State University Choir of Indonesia, the Stuttgart Baroque Orchestra, Stuttgart Kammerchor, and the Sweelink Baroque Orchestra. She has attended masterclasses with Eric Ericson, Grete Pedersen, Gunnar Eriksson and Tõnu Kaljuste. In the field of contemporary instrumental music, Taum was a mentee in Meitar Ensemble’s Tedarim Project, and directed new music/performance ensemble Wild Blossom Amsterdam. Taum has been supported by the Elton John Scholarship, the Erasmus scholarship and the America-Israel Cultural Fund scholarships in choral conducting.  In 2013-2014 Taum won the Gary Bertini Scholarship, awarded every two years by the Bertini Family and the Israeli Ministry of Culture to one promising Israeli choral conductor.