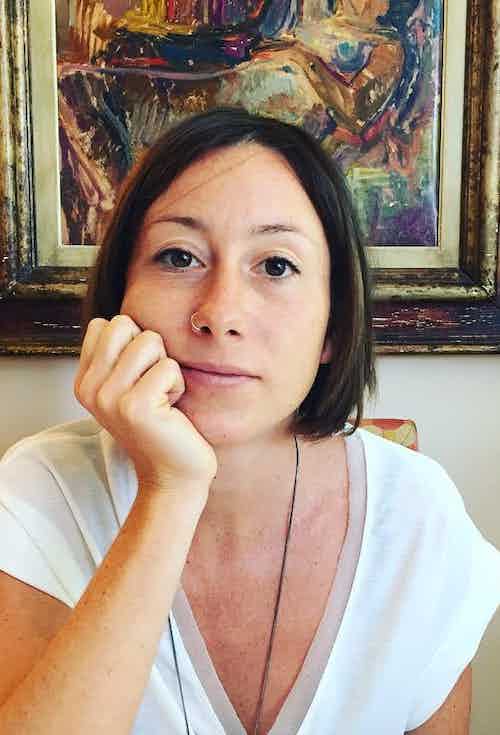 Daniela Fantechi (1984) was born in Florence, Italy. She studied Composition at Conservatory Luigi Cherubini of Florence, with Paolo Furlani and Rosario Mirigliano and at Kunstuniversität in Graz, with Beat Furrer, Clemens Gadenstätter and Georg Friedrich Haas. She has attended several master classes and summer courses, such as Internationale Ferienkurse für Neue Musik, Impuls and Acanthes, headed by Helmut Lachenmann, Beat Furrer, Toshio Hosokawa, Mark Andre, Stefano Gervasoni, Mauro Lanza, Francesco Filidei, etc. She also graduated with first-class honours in Master of Musicology at University of Florence in 2009, and she specialized in Pedagogy and Music, with the course Musica Bambina, in Pisa. Since 2010, she is founder and member of Blutwurst, a collective of musicians, focused on the electro-acoustic exploration of unisons and drones. Her compositions have been performed in Italy at Tempo Reale Festival (Florence), Play it (Florence), Mixxer (Ferrara), Atlante Sonoro (Roma), in Austria (Graz, Wien, Altbach), at Do Audible 2016, in Spain (Orense), in England with Rarescale (London). She was in Vienna (January-March 2016) for the Artist-in Residence Programm, supported by Kultur Kontakt, Österreich; and in Graz (February-April 2017) for the StyriaArtist-in Residence Programm, supported by Land Steiermark, Österreich.