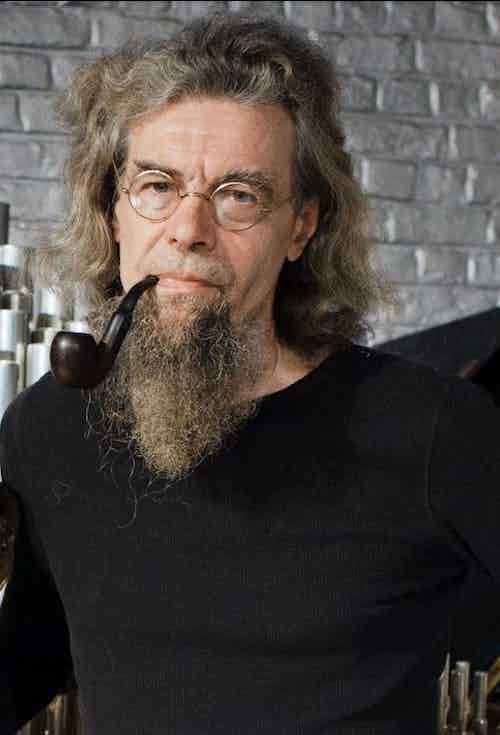 Godfried-Willem Raes, born in Gent (Europe) in 1952, is known worldwide as a 'musicmaker' in the largest sense of the word: as a concert-organizer he's been responsible from 1973 until 1988 for the new-music concert programming of the Philharmonic Society at the Palais des Beaux Arts in Brussels, in addition to which he also organized and still organizes all the concerts which take place at the Logos Foundation in Gent, in total about 150 international new music concerts a year. Over a timespan of over 45 years he turned the Logos Foundation into the most active new music organization in Belgium. As a composer/performer and instrumentmaker he is the founder of the Logos- Group (1968), out of which grew the Logos Duo, with Moniek Darge as well as the well known experimental <M&M> (Logos' Man and Machine) orchestra, operating with his nearly 60 spectacular musical robots.

Godfried-Willem Raes studied musicology and philosophy at the Ghent State University as well as piano, clarinet, percussion and composition at the Royal Conservatory of Music of Gent.

He has also published a great number of critical essays and articles in specialized publications. In 1982 he received the Louis Paul Boon Award for the social engagement in his artistic work. In 1988 he became a professor of music composition at the Ghent Royal Conservatory. In 1997 he also became a professor at the Orpheus Higher Institute for Music, a commitment he held, up to 2009. In 1990 he designed and constructed a tetrahedron-shaped concert-hall for the Logos Foundation in Ghent, a project for which it received the Tech-Art prize 1990. Next to his reputation as a composer, he is also a well known expert in computer technology, robotics and interactive electronic art. He holds a doctors degree from Ghent State University on the basis of his dissertation on the technology of virtual instruments of his design and invention. He is the author of an extensive real time algorithmic music composition programming language: running on the Wintel platform.