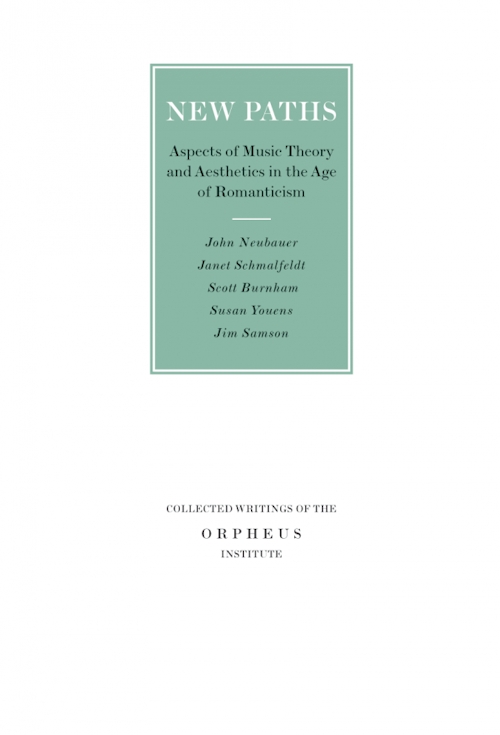 Aspects of Music Theory and Aesthetics in the Age of Romanticism

New Paths, the seventh volume in the Writings of the Orpheus Institute, is a result of the third International Orpheus Academy for Music Theory. Five renowned scholars discuss a variety of topics related to romanticism, focusing especially on the years 1800–1840. In a much-needed historical and critical overview of the concept of organicism, John Neubauer ranges from its origins in Enlightenment biology to its aftermath in postmodernism.
Janet Schmalfeldt shows that Beethoven’s op.47 not only should be called the Bridgetower rather than the Kreutzer Sonata, but also that this makes a difference as to its meaning. Extreme contrasts between emotional and mechanical types of music in late Beethoven are explained by Scott Burnham as stagings of the limits of human subjectivity. Jim Samson discusses Chopin’s little-known musical upbringing in Warsaw, arguing that his grounding in eighteenth-century aesthetics (as opposed to theory) has thus far been neglected. Finally, Susan Youens’ case study of Franz Lachner’s Heine songs sheds new light on radical experimentation by a so-called epigone in the period between Schubert and Schumann’s miracle song year.