I receive a mail from the one person I was so glad attended—sadly, he had to leave during intermission. (Old of age, he’d felt fatigued.) “It is indeed an excellent instrument in the hands of an artist like you who is willing to discover even the riskiest effects and dynamics.” Of course, I appreciate the compliment, but he heard me in the Steibelt sonata only (apart from that little Beethoven prelude). So whose hands are we talking about? Steibelt’s or mine? (Hands in this case must include feet.) I chose that particular sonata because the intended effects are so clear. It’s the instrument rather than the artistry that connects us. But László Somfai is reminding me of something important—something I’ve tended to downplay in my work as a scholar-performer: that technology only goes so far.

Which reminds me of Claudia Fritz’s talk in Vienna a few days ago. Claudia was the first keynote speaker of the conference. At the end of her lecture on the measurability of the quality of Stradivari violins, she showed a YouTube clip of comedian-violinist Jack Benny demonstrating the value of his $30,000 Stradivarius against that of an inexpensive violin.

Twice we hear him scratching away the beginning of Mendelssohn’s E-Minor Violin Concerto, the one violin just as horrible as the other. (The question here, of course, concerns the role of the bow, but let’s not over-analyze.) More than violins, however, aren’t pianos complex machines that require superb craftsmanship just to make them work properly? Traveling with this unique piano, what am I trying to prove? That I’ve earned the right to do so, precisely because I spend almost as much time with technology as with my playing?

We have a full day ahead of us. Eighteen students signed up for the workshop, and we selected seven. I’m especially excited about the two “Appassionatas,” as well as the one “Moonlight.” Centrally positioned in the room are our Erard and the Viennese fortepiano that the school owns. I look forward to going back and forth between them and to comparing two entirely different musical approaches. (The Viennese instrument is a 1970s Hubbard copy of a Stein—itself a piece of industrial archaeology, but still functioning quite well and beautiful in its own right.)

“Descend to hell.” This annotation penciled in the score of Kasei Mizoni, who’s the first to play, sets the tone for talking about the opening bars of Op. 57. This evening, my lecture will address the celestial qualities of the Erard and its emphasis on triadic overtones, which the French art of tremolo elevates to an almost spiritual level. While Beethoven explores this upward dimension in “Waldstein,” in “Appassionata” he does the exact opposite, plunging down to the lowest note of the keyboard to create a dark, gloomy atmosphere. 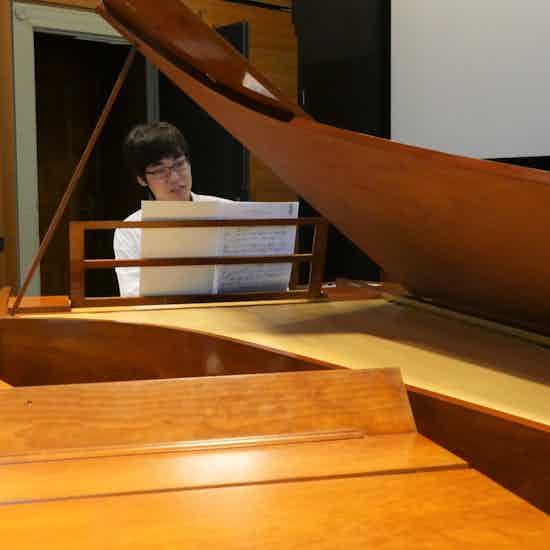 Kasei Mizoni is the first of seven young pianists to play today. Teaching a masterclass on Beethoven and his Erard is unchartered territory. The hour flies by—I wished we had more time.

Straight into hell indeed. While this poetic image seems accurate, Kasei plays the two first notes (also the first under a slur) as an upbeat, emphasizing (and landing on) the downbeat (that low F). But, as I start arguing, if the Erard’s sonorous quality is about triads, then the C counts for just as much as the F, as the upper note of a single, deep F-minor triad, also the first under a slur. I actually play F with the least volume because it’s the last of three and I want to continue hearing the triad together. Indeed, once F-minorness has been established, one may as well hang on to it, which explains that continuing slur, to be played (of course!) without dampers. This whole opening, in other words, becomes almost the opposite of a celestial tremolo. Initially going down rather than up, then rising through single tones rather than alternating ones, this infernal sonic gesture explores a dramatic side of the Erard.

Thus arguing my case from the instrument, we proceed to experimenting with una corda and moderator. Before we know, we’re immersed in an exercise of imagination and taste. Coordination with the feet becomes crucial, and obviously we must find a way to deal with that left-foot operated damper-pedal.

The hour flies by—and I wished we had more time. 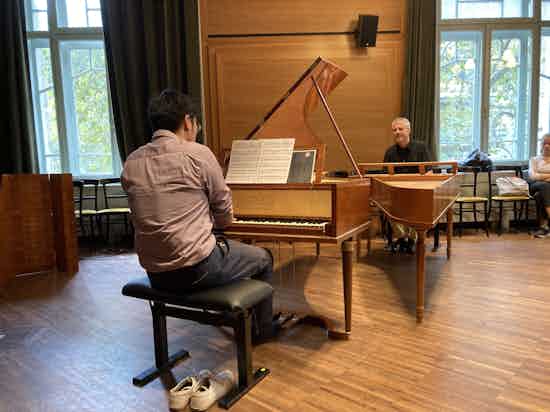 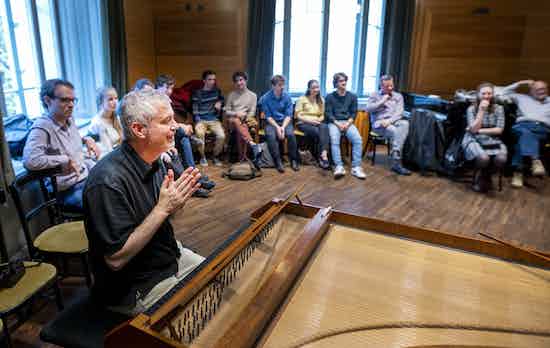 “Some of the sounds you could extract from it were ethereal and otherworldly, something that expanded my own imagination about possibilities in this music,” Tony Lin wrote to me afterwards.

But in the afternoon session we have another round of “Appassionata.” Tony Lin from New Zealand (who came to Budapest to study with Péter Nagy) wrote me an e-mail afterward, describing his experience, and as I edit my diary notes, I take the liberty of quoting him:

The only other time I came into closer contact with a historical instrument was one lesson on a Viennese instrument. But this occasion was my first with a French instrument and I can tell you this experience was wholly positive. Some of the sounds you could extract from it, especially the softer sounds and the tremolos, were ethereal and otherworldly, something that expanded my own imagination about possibilities in this music. [. . .] There was nothing too uncomfortable for me; apart from the obvious difficulty of navigating the reversed pedals with our years of solidified habit on modern pedals and that a few minutes of contact could not easily unlearn. I would love to have tried the first movement as well. I’m especially interested in the pedal (Beethoven’s own) and how they’d sound on the Erard. I’m also interested in how the extremes of its range would feel/sound on the Erard, in the development section, for example. The repeated notes as well would be interesting to try. It was very interesting what you said about the instrument having strong [triadic] overtones. This knowledge changes a lot of how I perceive this movement. Now it makes more sense. All those arpeggios are like giant columns of sound built from the bottom up. 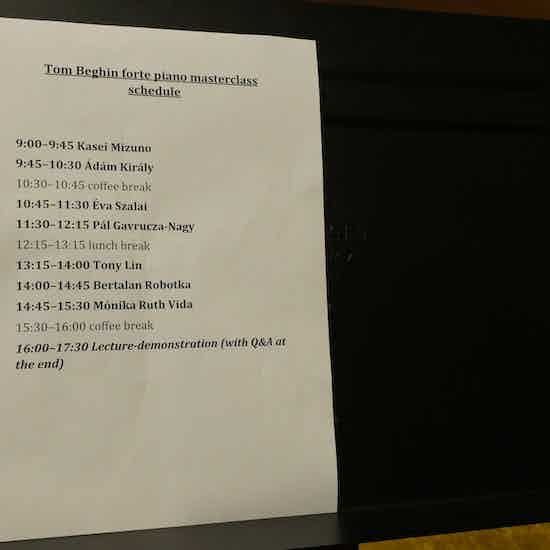 About the second movement of Beethoven’s Op. 31 No. 1 someone asks: “What about the staccato wedges?” The question gives me pause. “What about them?” I’m no longer used to thinking about notation in abstract terms, that is, independent from an instrument. “Do you mean, in conjunction with the Erard piano, or with the Viennese piano?” Together, we rehearse some answers. I don’t publicly say it, but this kind of questioning has become rather uninteresting to me. Take, as another example, the very popular question among pianists of “Beethoven and the pedal” (sic, in singular). We expect Beethoven’s scores to reveal innovation, but overlook the many realities of things—in this case, instruments that have knobs, knee-levers, or pedals, each coming with their own ideas or effects. In the next and final session of the day, featuring Beethoven’s “Mondschein,” we explore the famous directive of “playing without dampers” (often lazily interpreted as “with pedal”) by comparing how such effect works on the Viennese versus the French piano. 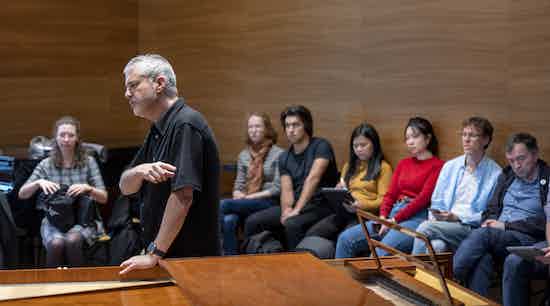 The lecture at the end of the afternoon enables me to summarize a lot of what was said during the day. 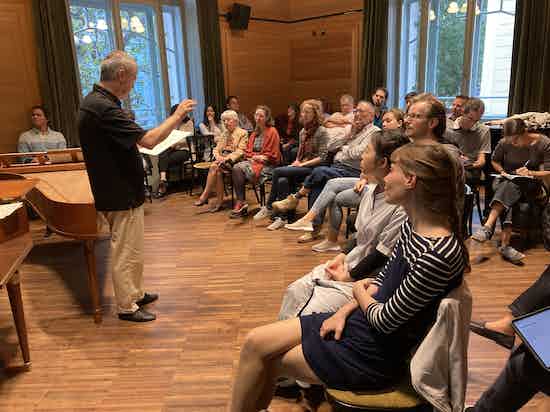 It was a good idea to end the day with a lecture. It enables me to summarize a lot of what was said during the day while allowing me to conclude by saying, “It’s all about listening.” This sounds like a cliché, but it isn’t. Listening as a creative activity is quite significant toward understanding the music of someone who experienced the onset of hearing loss precisely around the time of ordering a drastically new piano.

It’s all about listening. 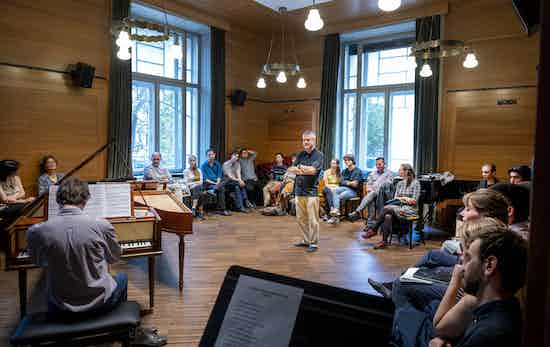 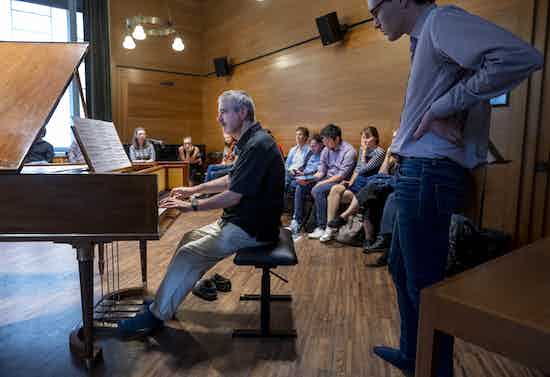 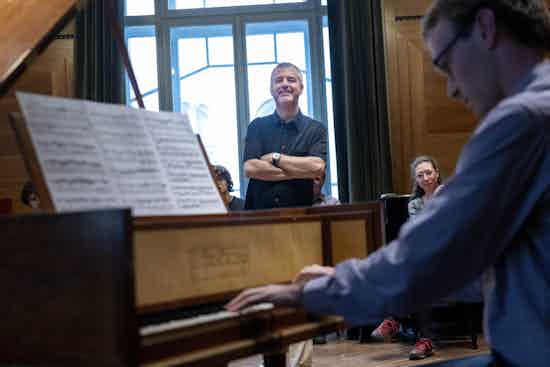 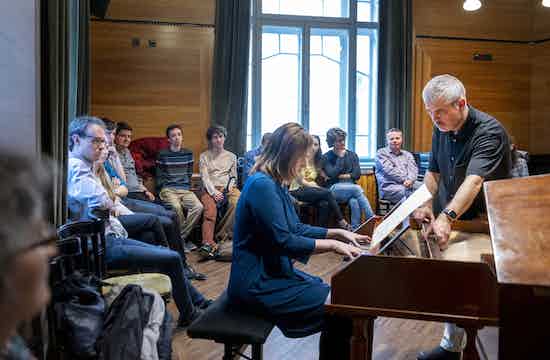 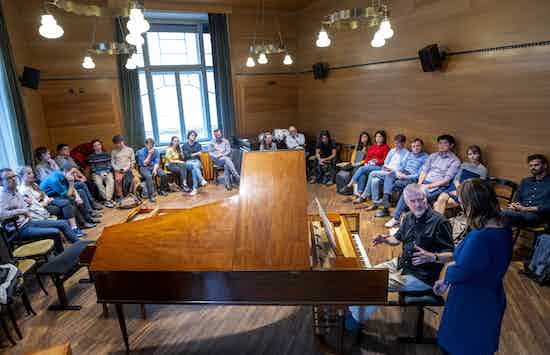 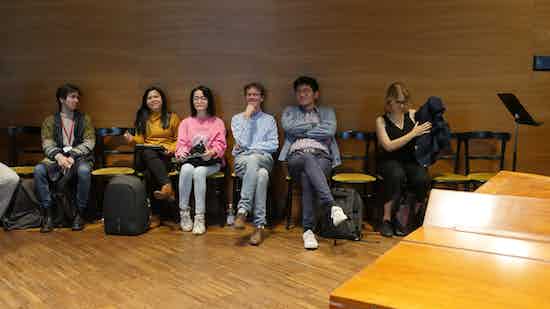 Photos of masterclass by István Fazekas