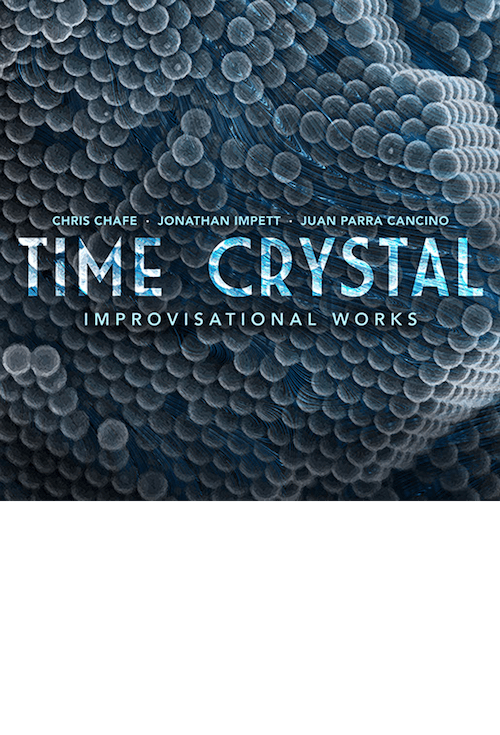 The Chafe Impett Parra Trio, in partnership with Ravello Records, has released their newest album, TIME CRYSTAL. TIME CRYSTAL is a musical project like nothing you’ve ever heard before—born at the nexus of art and science, this collection of improvisational “experiments” tests the interactions between musical inputs and computer-generated responses. What listeners hear on the recording is actually a methodological documentation of a laboratory session in Ghent, during which three musicians engaged in a fluid and captivating freeform dance. TIME CRYSTAL is electroacoustic music at the very vanguard of the genre; it features violoncello, double bass, trumpet, and electric guitar, and offers listeners the chance to take part in the musical discovery.

All tracks improvised and composed by:

This music was created in the context of 3 States of Wax – a project of the ‘Music, Thought and Technology’ research group at the Orpheus Institute, Ghent, Belgium.

The late philosopher of science Michel Serres drew many of his metaphors from music or from the natural world. In L’interférence (1972) he sought to identify the objects of study of modern science, and looked back to Descartes’ example of a piece of wax. Early modern science would have described it in terms of its shape, colour and texture, says Serres – geometrical description. In the later 19th and early 20th Century they would have referred to its properties of transmission of heat, of deformation and transformation – physical description. Now, he says, we would more appropriately find an informational description. We should understand it as a carrier and embodiment of knowledge: the feeding habits of the bees, the conditions of its formation, the process of its separation, the entire history of its subsequent use, handling, and environments. And in doing so we add to that history.

3 States of Wax considers improvisation in that light: how can the human and computational responses to material generated in improvisation be based not only on figural or gestural interpretations, but on an understanding of that material as embodying a broader history and environment of its emergence? In Serres’s terms, as the product of a time-based, situated modulation or interference pattern of heterogeneous sources of information?

As part of this project, Chafe joined Impett and Parra for a laboratory session in Ghent. In that context, documentation was initially a methodological tool. But here it reveals how – given a critical intensity of concentration and openness – musical structures can emerge from the exchange of energies and information. Following Serres, we likewise understand this particular encounter in terms of natural materials. In Opal, the amorphous structure is sometimes opaque, sometimes punctuated by patterns of particular colour or regularity. Three kinds of transition or transformation follow: the melting and refreezing of materials as they pass between states of fluidity and stability, the transformation of stable materials into gaseous, noisy states, and the passage from noise into fluid, responsive fluidity. The final title attests to the state of such a recording as a stable, fixed embodiment of earlier, highly unstable dynamics that have their own inner temporality – the process of three musicians learning and responding to the others’ behaviours.