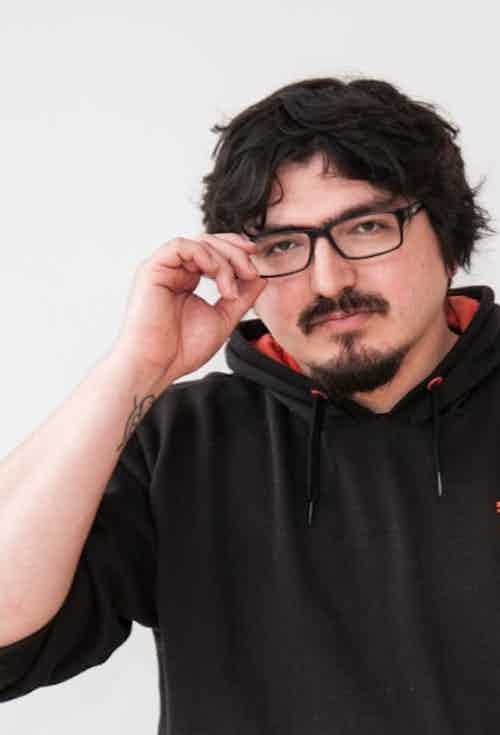 Juan Parra Cancino (b. Chile, 1979) studied Composition at the Catholic University of Chile and Sonology at The Royal Conservatoire The Hague (NL), where he obtained his Master's degree with a focus on composition and performance of electronic music. In 2014, Juan obtained his PhD degree from Leiden University with his thesis “Multiple Paths: Towards a Performance practice in Computer Music”.

As a guitarist, Parra has participated in several courses of Guitar Craft, a school founded by Robert Fripp, becoming part of various related guitar ensembles such as the Berlin Guitar Ensemble, the Buenos Aires Guitar Ensemble, and until 2003, The League of Crafty Guitarists.

His acousmatic piece Serenata a Bruno obtained a special mention at the Bourges electroacoustic music competition of 2003 and in 2004, his piece Tellura was awarded the residence prize of the same competition. It was recently edited in the album “50 years of Electroacoustic Music in Chile”, a release that obtained the 2008 Quartz prize for best compilation.

He is a founder and active member of The Electronic Hammer, a computer and percussion music ensemble devoted to the promotion, creation and diffusion of the music of the XXI century, whose debut album was edited by the EMF label; he also performs in WireGriot, a duo of voice and electronics that seeks to (re)construct the repertoire for the media.

His work in the field of live electronic music has made him the recipient of numerous grants from the Dutch government, through the NFPK and Prins Bernhard Cultuurfonds. The recognition for his work has given him the chance to participate in projects and give lectures in centers such as CCRMA (Stanford University, USA), Oberlin College (USA) Banff Center for the Arts (CA), Tokyo University of the Arts (JP), Republic University (Uruguay), Leuenburg Studios (Germany), Walter Maas Huis (NL), and to be composer in residence at the Centre for Composers (Gotland, Sweden) and University of North Texas (Denton, USA), among others.

Since 2009 Juan has been appointed as a joint researcher of the Orpheus Institute Research Centre in Music to work on the topics of creativity and performance applied to electronic music. He is currently a member of the Music, Thought and Technology research cluster.

Juan has recently been appointed as Regional Director for Europe of the International Computer Music Association for the period 2022-2026.