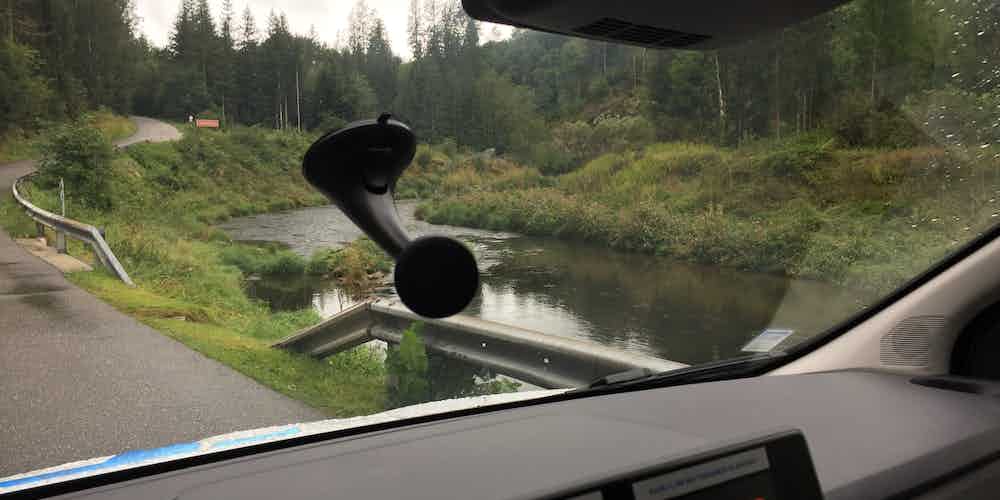 Driving through the mountainous pine tree forests, I remember something Martin once told me: that Viennese keyboard makers got their soundboard wood from here.

Leaving Martin’s house in the morning and driving through the mountainous pine tree forests, I remember something he once told me: that Viennese keyboard makers used to get their soundboard wood from these woods. As I navigate the curves of these narrowly winding roads, my thoughts wander back in time and it hits me that I’m traveling with my replica in the opposite direction than the original, after Ludwig donated his French piano to his brother Johann, who took it from Vienna to Linz.

As if proving my point, I suddenly find myself crossing the bridge over the Danube toward the center of Linz. And what do I see? The Wasserapotheke, or the very pharmacy that Johann owned for a number of years! I recognize it immediately from filming it for our documentary a few years ago, but am now approaching it from the other side and from a passerby’s perspective. I regret not having a co-driver to capture the moment and at least take a picture. “Rechts afdraaien” (“turn right”), Thomas insists (Thomas is my “Belgian-Dutch” voice on Waze), and I do as I’m told, turning away from the center and proceeding to the highway to Vienna.

Aside from such trans-historical musings, the mountainous drive also gives me second thoughts. How did the piano take all these ups and downs? Had I created stress by planning a stopover? Haslach at night was cooler than I had expected.

Also, did I make the right choice not traveling with a technician? At some point, there had been talk of Tim joining me: I’d feel so much more at ease. This provokes a related thought. How did Beethoven feel, owning a French piano in Vienna? Would he ever have taken out the action himself? If he had any maintenance skills, these would have applied to Viennese pianos. I, for one, would feel so much more reassured traveling with a Viennese piano. Over the years, I owned quite a few of them and de facto became good at fixing technical problems. But then, the very point of this adventure (for me just as well as Beethoven back then) is to travel with a unique, foreign instrument. Unfamiliarity is part of the game.

How did the piano take all these ups and downs? Had I created stress by planning a stopover?

I arrive at the campus of the University of Music and Performing Arts Vienna (“mdw”) according to schedule, around two p.m., and am glad to receive help from the two organizers of the conference, Alex Hoffmann and Werner Goebl, as well as from fellow conference attendee Malte Kob, an acoustician from Detmold, with whom by chance I started collaborating on the very subject of Beethoven’s Erard this past May. Mainly thanks to a spacious elevator in a new and well-designed building, unloading goes more smoothly than expected. 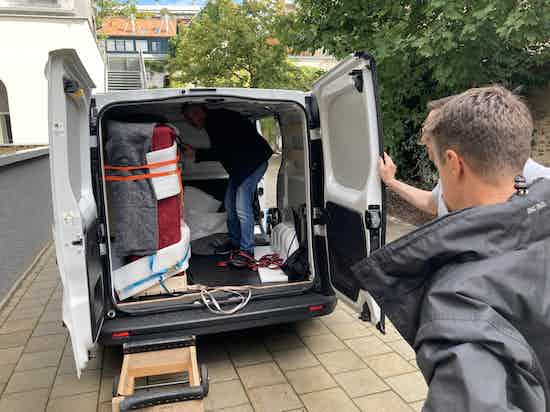 Arriving at the campus of the University of Music and Performing Arts Vienna (“mdw”), I’m happy to receive help unloading the van. My thanks go to Alex Hoffmann, Malte Kob, and Werner Goebl (who took these photos, so he’s not in them).

Mingling with conference goers that same afternoon feels all the more abrupt and strange. The moment you hang your name tag around your neck you become a participant. Nobody realizes you’re the musician-researcher who for the past forty-eight hours has been driving with his instrument. But then, I also don’t know what anyone else has sacrificed just to be here. 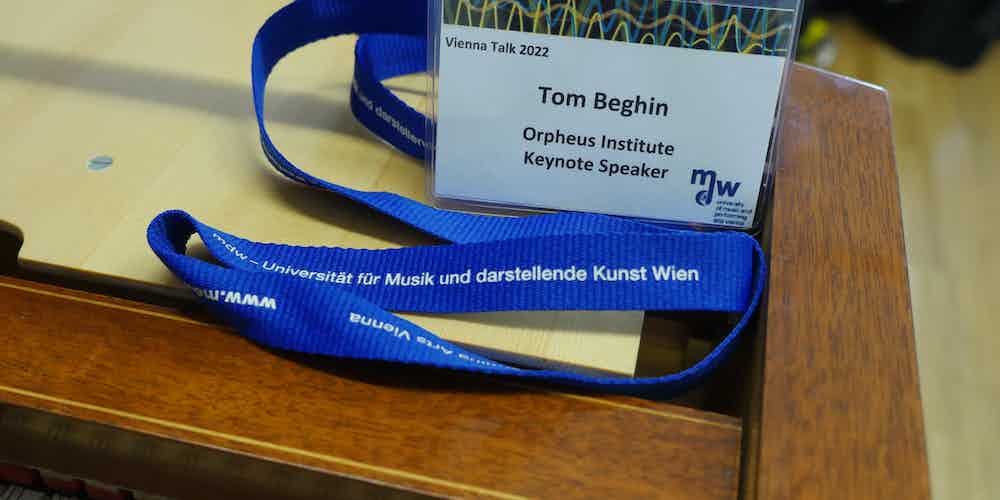 I get time to practice. We set up the piano in a beautiful studio room adjacent to the lecture-recital hall where the conference is about to take place. It feels like a privilege to resume my regular playing relationship with the instrument. The distance from my regular surroundings actually helps. I’m grateful for that new cloth under the keys. But rather than insisting that my fingers keep pushing down (either emphasizing the deficiency of the worn-out under-keyboard cloth, as I did before the repair, or checking why the new cloth is so much better, just after the repair), I now simply focus on the upward motion of the keys and enjoy after-touch as a bonus. I’m no longer second-guessing the machine, but simply reacting to it. I must remember this feeling for the concert tomorrow. 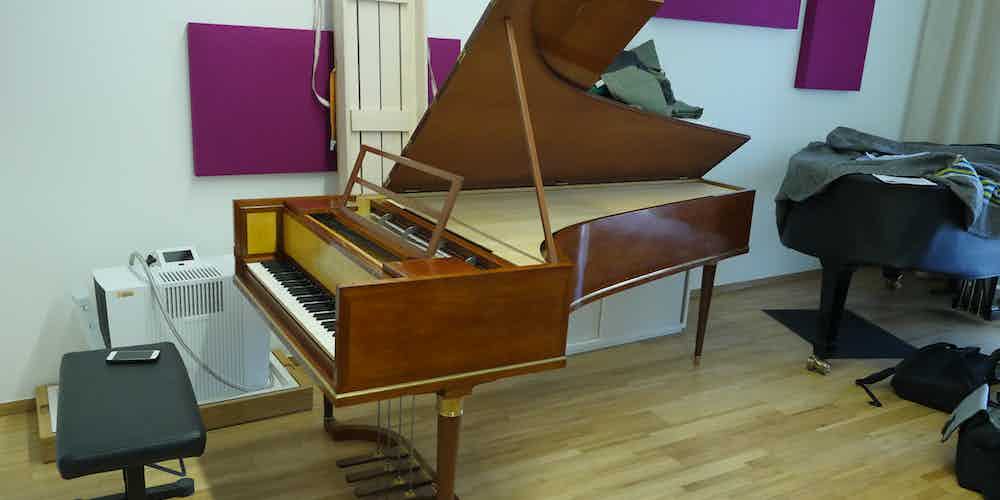 We set up the piano in a beautiful studio room adjacent to the lecture-recital hall. After having traveled with it this far, it feels like a privilege to resume my playing relationship with the instrument, now back on its feet.