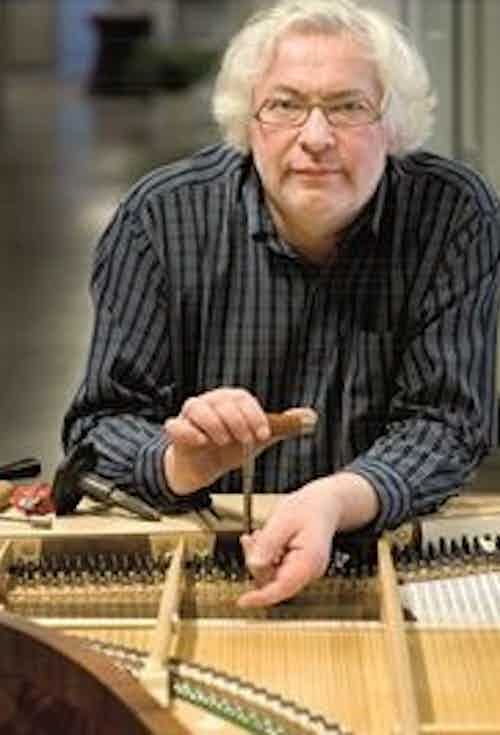 Chris Maene was born in 1953 and learned all about becoming an instrument maker in the workshop of his parents, Albert Maene and Zulma Doutreloigne, in Ruiselede, Belgium. At the age of 16, he built his first harpsichord and when he turned 21, he built a copy of a 1794 Dulcken fortepiano. The exceptional interest that Chris Maene has in harpsichords, fortepianos and modern pianos, is remarkable for an instrument maker these days. All three influenced one another and resulted in a uniquely versatile and extensive set of skills and knowledge. These, in their turn, laid the foundation of Mr. Maene’s present workshop where he is assisted by 8 craftsmen – each with his own skills – to manufacture and restore an ever expanding array of harpsichords, fortepianos and modern grands.

For more than 30 years, Chris Maene has been in the business and he has been able to build a lot of different instruments. His historical instruments end up with private persons, professional pianists, academies, conservatories,… both in Belgium and abroad. Some of his realizations stand out. In 2004, as one and only Chris Maene was given the permission by Steinway & Sons to study the first Engelhard Steinweg fortepiano (Seesen, 1836). From 2006 until 2008 four replicas were built of this instrument. Film maker Bram Crols captured all research and reconstruction in the documentary “Building a Legend”. In 2010, Chris Maene introduced a replica of a Pleyel concert grand from 1843 and in 2013, he built a copy of Beethoven’s Broadwood pianoforte from 1817. In 2015, Chris Maene takes up a new challenge. He questions the crossed stringing modern concert grand, 100 years after the concept of crossed stringing was introduced. As a result, he is currently working on a modern concert grand with parallel strings.

Fascinated by Master instrument makers from the past, Chris Maene collects historical keyboard instruments. A lot of these instruments are very valuable pieces and some were even restored to use during concerts and CD recordings. His collection, a true “piano museum”, contains about 200 different keyboard instruments.

Chris Maene is not only active as an instrument maker, but is also owner and Managing Director of Piano’s Maene N.V. Together with his two sons, Dominique and Frederic, he owns the family company that was founded by his parents and exists already 77 years. Every day, more than 45 employees turn their passion for pianos into practice in the four branches in Brussels, Antwerp, Ghent and Ruiselede. In 2010, Chris Maene was honoured as a citizen of Ruiselede. In 2014, Piano’s Maene was granted a Royal Warrant to the Belgian Royal House, a pinnacle of a many years’ cooperation.

In Belgium, Piano’s Maene is the exclusive importer of the superb Steinway & Sons pianos, but also has the “Doutreligne” instruments as its own brand. Furthermore, a selection of piano brands is presented to the customers, to always be able to offer the right instrument and meet every wish.

The passion that comes from Chris Maene for keyboard instruments, matches with his professional craft and know-how, pride, emotion, tradition and boundless respect for music.