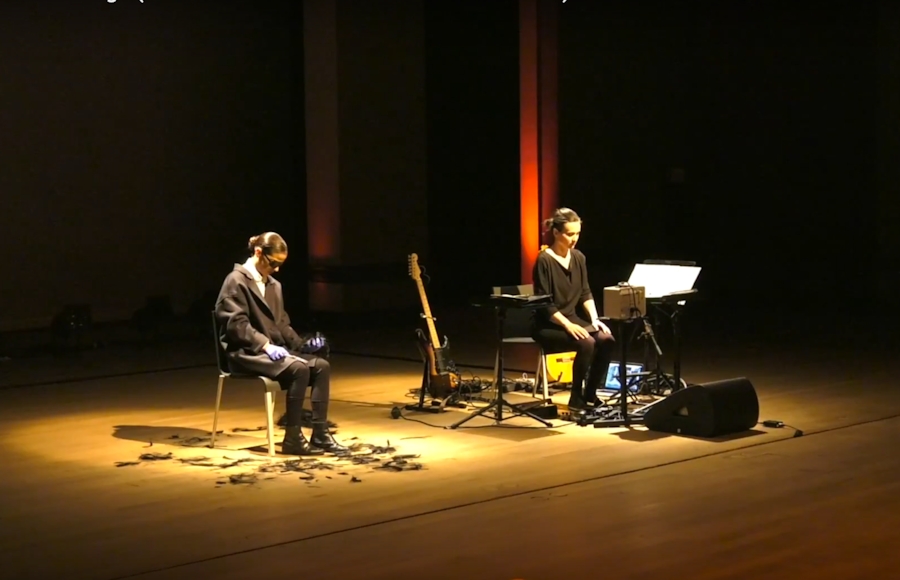 In the performance Aberrant Decodings the figure of the interpreter of Western notated art music is questioned and challenged in favour of an experimental attitude towards past musical woks. The performance takes place in the form of a “recital”, staging pieces by Nicola Vicentino, Sigismondo d’India, Atanasius Kircher, Claudio Monteverdi, Ludwig van Beethoven, Robert Schumann, and Giulio Caccini. Instead of presenting the pieces in their original instrumental and sonic configuration, they are evoked through sounds and gestures unrecognisable as belonging to their pastness: electronics, guitars, dance. The interpreter turns into the operator, a figure that instead of replicating, reproducing, reconstructing the musical past, emphasises the potential in it latent for the emergence of the new.

Whereas execution and interpretation relate to an ideal and aprioristic sonic image of the musical work (as Platonic copies), Aberrant Decodings produces simulacra: performance becomes a sonic “image” that relates to what is different from it (the musical work expressed by a score) by means of difference, and not by attempting to construct a (supposed) identity. In this process, internal resemblance is negated, together with the idea of composition as origin and performance as its telos.

The physical presence of the operator on stage is double: the musician, whose body exposes various degrees of involvement with sound production (from hyperphysical engagement with the instrument to evaporation into electronic sound); the dancer, body traversed by the de-anatomising affective power of sound-music.