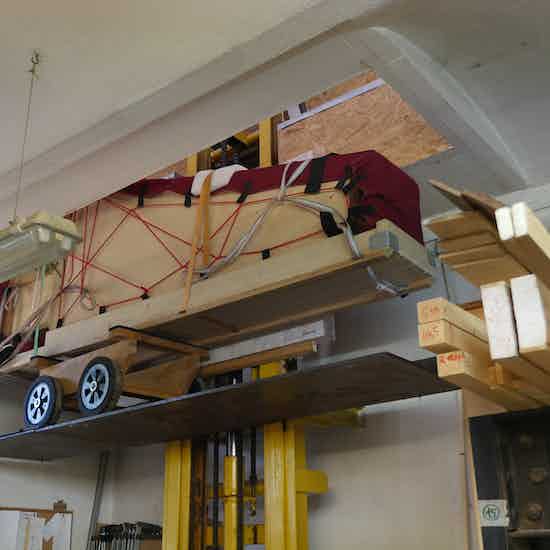 Another variation in piano moving, this is by far the easiest during my trip.

Paul McNulty and I are finishing breakfast. Everything in my fatigued body tells me not to touch the nicely strapped and packed contents in the van. But then Paul says, “Actually, yes, I’d like to see it.” I feel relieved. Rather than piling on top of, this may actually crown the preceding hardship and effort.

Paul instructs me where to bring the van. From there, it’s a breeze. There’s an elevator-platform from the ground floor to the exhibition room. In no time the piano stands on its legs amidst many others by McNulty.

I play some “Waldstein.” As I get to the second theme (those strummed harp-like chords, damper pedal and una corda down), I see Paul’s face light up. At that moment, I knew it was worth it. It takes one master to acknowledge the work of another. (“My hat off to Chris,” is what Paul said.) 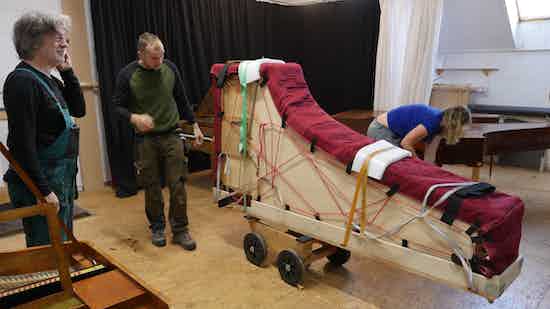 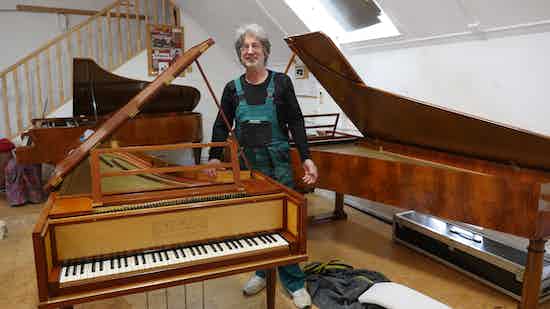 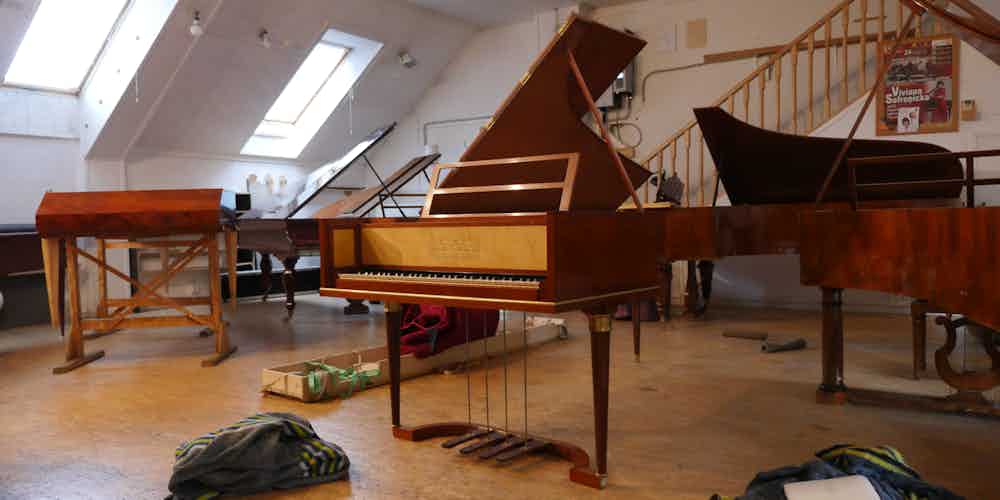 I enjoy the sight of our Erard Frères standing among several pianos whose sounds I know well from recordings. The room has the look of a hall of fame, with our Erard claiming its place next to Walter, Graf, Streicher, and Boisselot.

I enjoy the sight of “my” Erard Frères standing among several pianos whose sounds I know well from recordings: Boisselot (associated with Liszt), Baptiste Streicher, Graf, Walter & Sohn—all replicas made by Paul and his team. The room has the look of a hall of fame, filled with instruments worthy of being copied, not just by a single builder. Seeing Chris Maene’s instrument among those by Paul McNulty triggers thoughts of what it may have meant, say, for Nannette Streicher to meet Sébastien Erard in person, either in Vienna or in Paris. (For clarity: Chris and Paul know each other well and have met multiple times.)

I experience a big bout of fatigue during the afternoon. I can’t concentrate anymore. My body feels unbalanced. I withdraw and go out for a walk. But when after a couple of hours my energies resume, Paul invites me into his project. He’s redoing the soundboard of a Silbermann fortepiano for the seventh time—or was it the eighth? He explains his method to recreate optimal curving of the soundboard. He’s quite passionate about it. I’m reminded of the kind of conversations Mozart and Stein had (as we can read in Mozart’s letters to his father), but without the gross exaggerations Stein was prone to. (Or am I giving Paul the benefit of the doubt?) 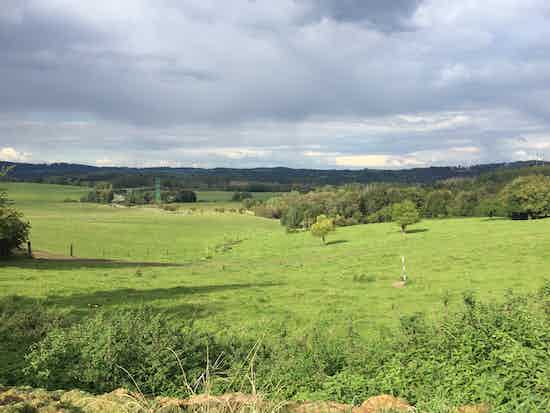 I experience a bout of fatigue. I must go out for a walk. 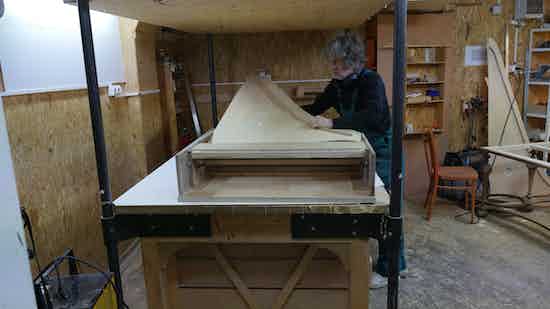 When after a couple of hours my energies resume, Paul invites me into his project. He’s redoing the soundboard of a Silbermann fortepiano.

Darkness sets in, and Paul offers to help pack up the Erard. Our interaction now takes an unexpected turn. Ever since getting a thick cover for the instrument (which was last May, for the Berlin trip), the original wooden sled has been too tight. (This sled goes over the cover on the side of the piano, before turning it sideways.) “Shall we remove some of the wood?” Soon we find ourselves in Paul’s CNC (“Computer Numerical Control”) room. It takes about a half hour to prepare the calculations and another half hour to do the sawing, but it is sheer entertainment to watch that little robot drill go round and round. It’s just a sled (and not some part of a piano), but still.

And so entanglement takes a happy turn. It took one piano builder’s instrument for me to bond with another piano builder, and to forge the possibility of a friendship. At some neighboring town, we conclude a most enjoyable day with dinner. We take Paul’s van, not mine. It’s so nice to be the passenger.